The Chinese national government has embraced the ecocity as a model for urban development. China is the third largest country by area and one of the most densely populated countries in the world, with a national population of 1.3 billion. China is also the world’s largest producer of greenhouse gas emissions due to the manufacture of consumable goods for export. China has instituted a one-child policy to keep its population growth in check. It has also adopted a circular economy policy that aims to reuse resources to reduce pollution and improve energy and materials efficiency. Nevertheless, many cities in China are plagued by pollution and traffic congestion problems.

For example, Guangzhou is a bustling and prosperous Chinese metropolis with a population over 14 million people. It is situated in Guangdon Province, an open economic development zone that is home to several manufacturing industries supplying global export markets. The area has seen annual increases of greenhouse gas emissions at a rate of 10% per year for the last decade (Liu et al. 2014). Buildings in Guangzhou reach 100 stories. Everyone lives in some form of multi-unit residential dwelling, ranging from four-story walk-ups to large high-rise towers. Despite achieving super-high density, complete with a rapid transportation subway system, the urban development pattern in Guangzhou is dominated by automobile traffic with six-lane streets and triple stacked roadways. This is an example of three dimensionality designed around automobile dependence. The city is often blanketed by smog, sourced from motor vehicle emissions. 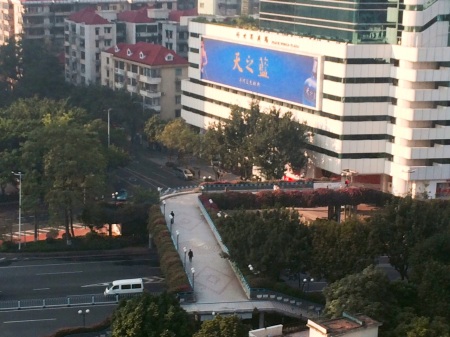 I had the good fortune to visit Guangzhou last week. The purpose of my visit was to learn more about the environmental pollution challenges this and other cities in Guangdong province face. High density, walkable villages surrounded by green abound at the outskirts of the city. For example, just north of the Guangzhou airport are the villages of: Shiputang, Guagancun, Shangzhou, Caibian, Leping Village, Yumin New Village, Chigantu, Liantancun, Gangzai, Gangwei and many more. Yet, even in the heart of this bustling, prosperous Chinese city, hints of ecocities emerging can be found. I took a walk through part of the Guangzhou central city and found several examples of narrow pedestrian streets with shopping on the main floor and residences above, reaching an average height of six stories. Trees and greenery at corner pocket parks added to the charm of these interstitial spaces. Most people travelled by foot, bicycle or some combination thereof. Curiously, the newer high rise developments on the main thoroughfares also follow a pattern of commercial at grade (and subsequent three to four stories) with residential (up to 85 stories) above. The pattern is the same, but the scale is much bigger. Most people in the newer development areas travel by bus or private automobile; nevertheless, elevated pedestrian walkways also enable people to move around freely by foot.

Comparing these similar patterns of development at different scales provides a wonderful opportunity for reflection. In both the old and new development of Guangzhou, the same patterns of mixing commercial and residential uses within buildings exist. However, the streetscape in the new development is expansive. Ecocity development must work at a scale designed for mobility of the human body, not the car body. This is what enables access by proximity. I found one exciting example of this approach at the Guangzhou Pearl Market. Can high rise development be designed such that the street scape remains pedestrian-oriented, at a small and intimate scale? Could different approaches to massing of buildings enable a more pedestrian-oriented environment without sacrificing density? Much research exploring these questions is currently underway and warrants further reflection and experimentation. 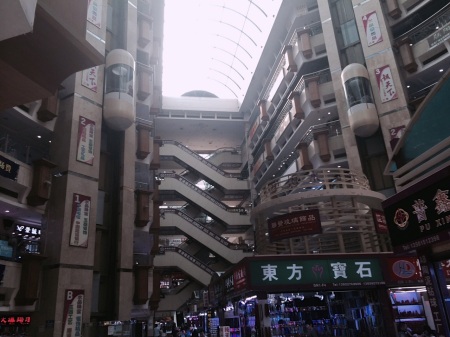 This entry was posted on Tuesday, December 9th, 2014 at 8:42 pm and is filed under China, City Planning, Development, Ecocity Insights. You can follow any responses to this entry through the RSS 2.0 feed. You can leave a response, or trackback from your own site.